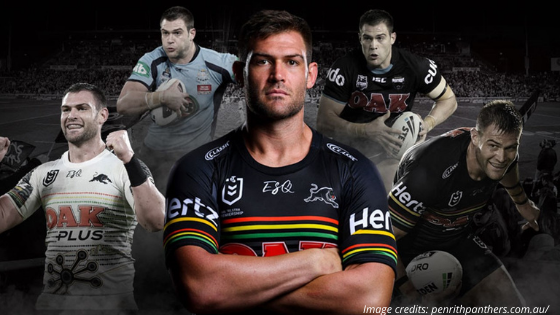 Tim Grant is a qualified Real Estate agent. He completed a Cert 3 and 4 in Fitness, a business course and working his way into the performance cars trading industry. All the while playing Origin and almost 200 NRL games. Yet he still declares “I didn’t do enough and I still haven’t done enough. Yeah I did a little – but I wish I did a lot more”. In fact, Tim has been retired for 2 years now and he’s still unsure what he’s going to do in the future. Tim was fortunate to play 13 years in the NRL, building a network of connections, being financially stable and having time to complete those courses. However, what about the ‘average NRL player’ with the median of only 42 games?

Ferris Bueller once famously quipped ‘Life moves pretty fast. If you don’t stop and look around once in a while, you could miss it’. For Tim Grant, that almost happened from 2006 to 2008. A local Penrith junior, Grant started 2006 in U/18’s SG Ball. By the end of the year, he had won that comp, played up in the winning U/20’s comp then completed pre-season with his heroes like Luke Lewis. Trent Waterhouse and Tony Puletua in first grade, where he debuted in 2007. For Grant, from a young age it was all about Rugby League. “It’s definitely something I always wanted to do – I never really had a plan B. I just always wanted to play footy and it happened really quickly”. If Ferris played Rugby League, there’s a good chance he may have played his 42 games before stopping, looking around and missing the opportunity to complete any further work or study!

The fickle nature of professional sport

In 2003, Penrith won their second premiership on the back of young, dynamic local juniors. With the following seasons bringing limited success, the successful SG Ball and Jersey Flegg (U/20’s) teams were seen as the next wave; with the club investing heavily into guys like Tim Grant and Michael Jennings. Come 2014, the Panthers were now faced with a crop of talented juniors they couldn’t afford; with Grant, just 18 months after his bustling NSW Origin debut in 2012, being forced to leave for South Sydney on a 4 year deal starting in 2015. Future secured right? After just one season, that deal was broken; with Grant then moving on to the Wests Tigers. This was a player who made one of the great State of Origin debuts now being traded around like a disposable commodity just 2 years after. This may have galvanized Grant into doing a few of the aforementioned courses but what if it had ended before securing the 4 year deal?

Perhaps ‘courses’ is the wrong description, as Grant explains. “A lot of people talk about doing courses and education…. But Rugby League is traditionally a blue collar game. For a lot of players, studying can be quite daunting”. Grant’s face lights up when he speaks about his ideas to help those younger players for life after sport. “There should be another avenue for players to go down because a lot are “hands on learners” – I know guys who hated school yet are running their own businesses in building, construction, mechanics to name a few”. Each year, the NRL announces an “Academic Team of the Year”; players who are engaging in studying and qualifications – a great initiative to break the stigma of the ‘alpha footy player’. However, Grant believes studying a course is worthless unless you find your “why” and “desire” first. “Once you find your passion, it’s easier to then start studying. If a player studies first, they may be going through the stuff they don’t like, whereas if you go to a job site, you start doing work experience as a builder, maybe you get interested and then start studying after”.

Tim Grant laughs when being faced with that “revved up V8 westie” stereotype. “Yeah, most people think that when I tell them I am from Western Sydney and how I love muscled up performance cars”, gushing about Dick Johnson being his idol on the Talking with TK podcast. “Driving a big V8 car on a Sunday morning, going to visit mates for coffee, no radio on – it’s leisure; it’s therapeutic”, further giving weight to the belief that players need an outlet away from sport. Grant is grateful when describing his current work situation. “I’ve got (former player) Bryce Gibbs to thank for my job working in the mines (in Wollongong). And it suits me – 3 x 12 hour shifts. It allows me to do some work in trading performance cars” which, with Holden closing in Australia recently, isn’t just a hobby but fast becoming a booming industry.

A tough front rower. A self confessed rev head. Loving the physical work of the mines. How many players would benefit from doing physical-type work experience as opposed to formalized study? Grant explains “There’s players who might be great at studying….. I don’t think I have the attention span – but I learn practically. I definitely could have got out there and been more practical and hands on and figured out what I did or didn’t want to do. I’d urge young guys to do that for sure.

Make the most of your network

Sounds great. But – how? Grant implores his younger comrades. “There’s so many people in the Rugby League community that are willing to give up their time, give advice or mentor you. These are successful people who, if you didn’t play and if they didn’t have an interest in rugby league, you’d have to pay tens of thousand dollars just to have a meeting with them. Young players – we’ve got this network at our disposal, so definitely tap in and use it!”. However, as Grant muses, building up a network and learning to communicate can be a skill in itself. “But just ask! We’re all blue collar, we all want to help each other and we’re all in this together!”.